QUESTIONS WHICH **MUST** BE ASKED OF THE TWITTER EXECUTIVES BY THE REPUBLICAN SENATE INTEL COMMITTEE ON SEPT 27, 2017, TO STOP COLD THE LEFTIST AGENDA ON SOCIAL MEDIA AND TO PROTECT PRESIDENT TRUMP FROM THE VERY SERIOUS RUSSIAN CONNECTION POLITICAL WITCH HUNT.
(Note: Scroll down for Senators contact information)


1. My constituents want to know why we should take Twitter's testimony as truthful and legitimate when it comes to anything remotely political when the following facts are manifestly, unarguably true: That Barack Obama created a "paid twitter army" according to Reuters news agency in 2013, an army designed to shame and destroy critics of Obama, which Twitter allowed while republican voices have been manifestly regularly censored and trolled. FURTHER,  That IN THE OPINION OF MANY OF ALL OUR CONSTITUENTS all of twitter's top executives are apparently over-the-top liberal democrat conspiracy theory extremists, who deny the legitimacy of the last presidential election and almost daily take to trashing President Trump while claiming that they wish Obama was still president or that Hillary Clinton  had won. FURTHER, that a former top Twitter employee, Katie Jacobs Stanton,  had worked for Obama's administration in a public relations capacity, did the same for Hillary Clinton while Clinton was SECRETARY OF STATE, and then spent several years in the same capacity as an employee at twitter, with a job entailing influencing public opinion. FURTHER, and perhaps most troubling, that a woman named "Allison Shea", who apparently never even attended college, who has for years gone by the fake name of "Delbius Harvey", whose only-ever former job before Twitter was, starting at the age of 22 by her own admission, trolling with what has been described by law enforcement and others as a "trolling operation", a group called "Perverted Justice"; that that woman, Del Harvey, has been Twitter's head of Trust and safety for over ten years while unaware women and children are apparently trolled to the point of committing suicide on a regular basis; an identical claim and complaint leveled in years past at Del Harvey and her friends at her group Perverted Justice. Given all these total outrages, and hopelessly irresponsible and destructive actions by Twitter, how can we possibly take anything Twitter says regarding anything remotely political, even the smallest detail, as legitimate when all these facts about the Twitter corporation are absolutely irrefutably factual and true?


2.  Before we can take anything you have to say before this committee as serious and objective, I have to ask a few questions being demanded by my constituents. Could you please explain to us why Twitter is censoring and allowing the criminal harassment of conservative Republican on Twitter? Instead of stopping the crimes, your head lawyer, Vijaya Gadde, who makes $9 million a year according to Forbes, received a package with a letter and what is claimed to be conclusive evidence of the crimes, also handed to President Trump, Judge Jeanine Pirro, and others by one Ms. Kathy Amidon, letters for which she has the signed return receipts from President Trump, Attorney general Jeff Sessions, and your head lawyer Vijaya Gadde. Instead of the well-paid Ms. Gadde doing her legal duty to stop the criminal harassment by deleting the accounts of the harassers and the malicious censorship i9n violation of TITLE 18, U.S.C., SECTION 241, which holds accountable anyone denying anyone else their constitutional rights, including the First Amendment and stopping and criminal terrorism against conservatives, you head lawyer and other Twitter executives simply feed the hate by tweeting poison about President Trump and other Republicans. Please tell us why we can take your testimony before this committee seriously given such a situation?

3. Before we can take what you have to say before this committee seriously, I have been hearing from my constituents who have some questions which they want asked of you.

A  Are you familiar with a woman named Allison Sea, who apparently never attended college, who for years has gone by the fake, not legal, name of Del Harvey, who has been with Twitter from the start? She is your head of trust and safety at Twitter.
B. Were you aware that the only apparent previous "job" she held in her life, if you want to call it a "job", was as a top operator with an organization that has been described and condemned by NBC news executives, law enforcement, district attorneys, judges and others as a "sadistic trolling operation"? The group of which was a so-called officer, which still exists, is  called Perverted Justice. Did you know that?


C. While Perverted justice claimed their motivation was to protect children, many, including past members of Perverted Justice, have testified that the protecting of children was a paper-thin excuse to target random individuals on the internet and manifesting the criminal act of severe harassment, including calling their homes in the middle of the night, causing them to lose their jobs, ruin their marriages, and often destroying innocent lives, mistakes the group has readily admitted but for which they never actually took responsibility? Were you aware of those facts about Del Harvey's group Perverted Justice, and if not, how can we take you testimony before this body today with any credibility? Please remember that you are under oath.


D. Are you aware of the creator of Perverted Justice, a community college dropout, a man to whom your high-level employee, Allison Sea aka Del Harvey, has apparently pledged lifelong loyalty, a man named Phillip John Eide, who has since legally changed his name to his trolling character of Xavier Von Erck, who once wrote this: ""I wish I could (expletive) kill 9/11 conspiracy theorists. Yes, kill. I'd like to kill them. . . . I want you to die. I wish you would die. Why don't you die? Just die."  Further, were you aware that this man to whom Del Harvey pledged so many years of service, also tricked a former friend into leaving his wife by creating a fictitious online female lover, eventually having cyber sex with the man, recording it, and then using many months of this activity to ruin the man's life? This is not the kind of behavior that anyone should want of perhaps the closest personal associate of Twitter's executive who is supposed to function reliably as the top firewall between the Twitter corporation and our kids to keep them safe online. Were you aware of these facts and if so, why is Allison Shea, aka Del Harvey and her friends at Perverted Justice still being employed by Twitter? Because it certainly explains the millions of complaints about twitter trolls, including those who have trolled thousands of particularly sensitive victims into committing suicide. The death toll due to Twitter trolls apparently now vastly outnumbers the number of people who died in the 9/11 attacks. Were you aware of Xavier Von Erck and these facts?
E. Does Xavier Von Erck, to your knowledge, work at Twitter or has he ever worked at Twitter, and if so, in what capacity? Remember that you are under oath.

3.  Before we can take you impartiality regarding anything having to do with the current President of the United States, Donald Trump, please explain why we can do that when in 2013 Reuters reported that former President Obama created a "paid Twitter army" which the associated Press itself reported was a public shaming operation, designed to publicly destroy anyone critical of then-President Obama ? That is a nice way of saying what we now call Twitter trolling, and it has been reported time and again that it results in terror and depression and fear-induced suicide for the victims. If you cannot even stop things of that criminal magnitude, why should we believe a damn thing you have to say regarding any subject when it comes to politics or social media communication?

THE TAKEAWAY IS THIS:

1. People are now aware by the tens of thousands that that information and those questions were put before Senator (each name listed below) have been seen by him. Or they are rightfully assuming his office has shown him before the committee hearing. By the end of the day on Sept. 27, 2017, there will be hundreds of thousands of aware voters. In a few weeks it will be millions of aware voters.

2. Every day millions of angry and frustrated conservatives are trying to be heard on Twitter and now understand that Twitter is essentially the Weather Underground in control of social media. IF SENATOR (names listed below)  DOES NOT ASK THESE QUESTIONS TO TAKE AWAY TWITTER'S PRESTIGE IN THE INTEL COMMITTEE HEARINGS, THE BLAME IN THE PUBLIC MIND GOES FROM TWITTER TO SENATOR (each name listed below) AND RIGHTFULLY SO.

3. IF PRESIDENT TRUMP IS POLITICALLY DAMAGED BY WHATEVER TWITTER TESTIFIES BEFORE THE COMMITTEE (AND IS SPLASHED ON EVERY NEWS SITE IN AMERICA FOR MONTHS OR EVEN YEARS) WITHOUT THESE QUESTIONS ASKED, THE VOTERS WILL RIGHTFULLY BLAME SENATOR *each name listed below)  FOR NOT ACTING TO PROTECT THE PRESIDENT IN A MEANINGFUL WAY; TO CHALLENGE TWITTER ON THEIR POLITICAL PREJUDICE AND CORPORATE DECISIONS AND OPERATIONS.

4. From this day forward, every time a conservative on Twitter is attacked, censored, threatened, etc, AND IT IS MANY MILLIONS, NOW, it will be a reminder that Senator (names listed below) asks for votes but did nothing to help. And elephants have long memories. Right up to 2021.

NOW IS THE TIME. THESE QUESTIONS MUST BE ASKED AND THE ANSWERS FROM TWITTER REPRESENTATIVES  CHALLENGED:  http://www.teapartyfireants.net/questions-congress-must-ask-twitter.html

Other offices and
EMAIL BOX
https://www.collins.senate.gov/contact 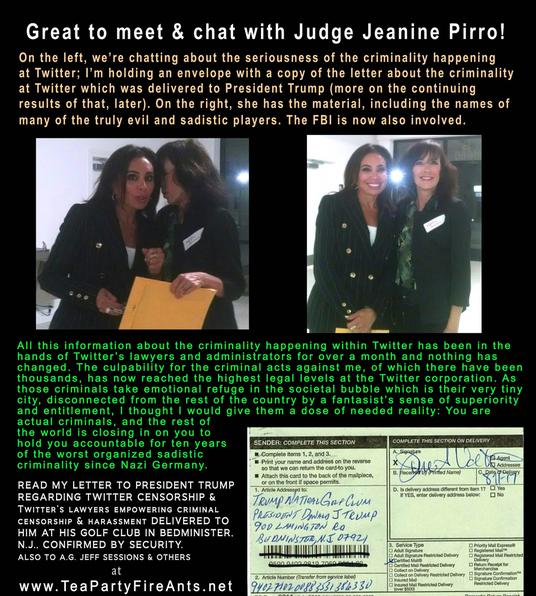