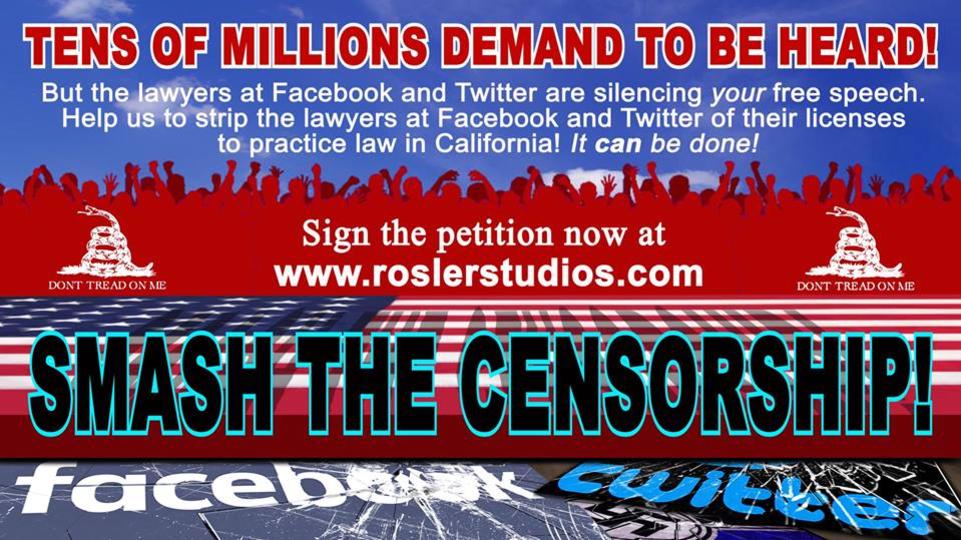 While you are here, please check out the crowdfunder with no obligation on this website


***  EDIT, WE HAVE NOW MADE IT EASY FOR YOU TO FILE YOUR OWN COMPLAINT AGAINST FACEBOOK AND TWITTER LAYERS. More links to more forms and a few names to start off with, but more HEAVY DUTY material - and more names - to follow. SEE BOTTOM OF PAGE   ***

OBJECTIVE: INITIATE DISBARMENT PROCEEDINGS AGAINST THE SOCIAL MEDIA GIANT LAWYERS AND FOLLOW THROUGH TO ATTAIN THEIR DISBARMENT.

Some "experts" say that disbarring a lawyer (revoking the lawyer's legal right to be a lawyer) is rare. Not true. Last year alone over 1,000 lawyers were disbarred. Since jan 1 of this year, we count 38 disbarment in the state of California alone, where Facebook and Twitter corporate offices are located. That's approximately one every two days on-average over 70 days. The bad acts of those disbarred lawyers, by the way, are generally laughable compared to what is plainly happening inside of Facebook and Twitter.

EDIT - IMPORTANT! On Monday, March 11, 2019, David announced his solution during several 30-minute over-the-air radio interviews (with more radio shows being booked). Press releases were sent to over 100 right-leaning news outlets about the radio shows. THE FOLLOWING DAY, FOR THE FIRST TIME IN ITS HISTORY, FACEBOOK WENT DARK FOR 15 HOURS, WITHOUT PRIOR WARNING TO ITS 2 BILLION USERS, AND CLAIMED TO DO SO FOR 'MAINTENANCE" - AGAIN, WITH NO PRIOR WARNING.  A sudden change in Facebook within 2 days is exactly what David predicted the day before, and while no one can quite claim definitive causation yet, all agree that a mere coincidence seems extremely unlikely.

As the owner of David Rosler Christian Motion Picture Studios, David has legal standing on this issue as both a citizen and as a business owner. Within 3 weeks the appropriate paperwork will be filed to the following, but not limited to, The California Bar, to initiate disbarment proceeding, The California Supreme Court  and apprising of this action and requesting same from The Federal Communications Bureau (and the many members of their new internet task force), the U.S. Attorney General, The Federal Trade Commission  (according to reports, that government agency is examining whether Facebook violated an earlier consent decree) and The Justice Department.  Others may be added.


It may take a day or a week or so, but for all intents and purposes, THE CENSORSHIP STOPS TODAY BECAUSE THE LAWYERS WILL ORDER IT TO STOPPED WITHIN FACEBOOK AND TWITTER TO SAVE THEMSELVES. IT'S THAT SIMPLE. Usually, a criminal prosecution results in disbarment, but, while rare, the process can go the other way and the sanctions from the bar will make the prosecutors curious.


Here is an abbreviated list of the issues the lawyers will face in the next three weeks:


Sarbanes Oxley
Sarbanes Oxley (SOX) imposes a watchdog role for General Council (lawyers) who must report any potential violation to the chief executive officers and if the response from these officers is inadequate, then to the board of directors to stop any potential wrongdoing.  The reasoning behind the SOX-imposed requirement is that GCs have a moral obligation to society at large to set the corporation in the right direction. The law demands that they use their legal expertise to advise, intervene and stop potential corporate wrongdoing.  Failure to do so and engaging in many other acts related to that role of watchdog to the company can result in Fines up to $1 million and ten years in prison, even if done mistakenly. If committed purposely, the fine can be up to $5 million and twenty years in prison.


8 U.S. Code § 241. Conspiracy against rights
If two or more persons conspire to injure, oppress, threaten, or intimidate any person in any State, Territory, Commonwealth, Possession, or District in the free exercise or enjoyment of any right or privilege secured to him by the Constitution or laws of the United States, in this case, the 1st Amendment, they shall be fined under this title or imprisoned not more than ten years, or both. "Project Veritas" undercover videos and whistleblowers have confirmed that this exact action of conspiracy, as proven by intent, is organized on a massive scale for exactly that purpose inside Twitter and Facebook. It is impossible that the General Council of Facebook and Twitter were unaware of these issues. For the uninitiated, a conspiracy does not necessarily  mean conspiring to commit a crime. it  means conspiring to do something with malicious intent that would be hurtful, even emotionally, to another.  In this regard there is no question of the manifest federal crime of conspiracy on a vast and massive scale inside Facebook and Twitter. Again, the corporate lawyers have neglected to rectify per their legal duty.

Section 230 of the Communications Decency Act,
In which interactive computer services including Facebook and Twitter receive immunity for their users’ content. Courts have held that this allows editing by social media administrators provided such actions are taken in good faith. The user communication tampering has been well-documented as being taken in bad faith and the GCs have plainly failed in their duty both re Sarbanes Oxley and RCW 2.48.220, fuduciary duty, etc... Additionally,


Anti-Trust Law
Violation of anti-trust law and conspiracy to willfully do the same. The Justice Department last year issued a statement after Senate hearings regarding  “a growing concern that these companies may be hurting competition and intentionally stifling the free exchange of ideas on their platforms,”  The implications of this given Sarbanes Oxley and the laws governing conspiracy are extremely serious.


Background
David, his studio and his Associate Producer Kathleen Shell have been for years relentlessly censored on Facebook and Twitter. Twitter trolls, individuals engaged in plain criminal harassment,  the massive evidence of which consisting of hundreds of screenshots which include death threats, was sent via certified mail to and was entirely ignored by Twitter Lead Council Vijaya Gadde (that's her just behind Twitter CEO Jack Dorsey at last year's hearings).


In anticipation of this disbarment action by David, David posted in several Facebook groups and kept track of the results which leave absolutely no question whatsoever of Facebook's censorship of the David Rosler Christian Motion Picture Studio and various projects. The absolutely massive damage done to the studio in a world where all motion pictures require significant Facebook and Twitter  exposure is at this point incalculable. As evidence of the censorship specific to David and the Studio, here are the groups, the number of members in each group and the number of people who responded ("ENGAGEMENTS") There are many more examples..


Incredibly Strange Films. Membership 147,674
A group devoted to extremely offbeat movies from the "retro era"
David's post defended Ed Wood as a terrible director, but not the worst ever
118 likes/hearts  /  446 comments
ENGAGEMENT PERCENTAGE  0.38%


Jigglers, Rubber Monsters and Figures.    Membership 731
Another eclectic group, this one devoted to 1960's-era rubber gumball spiders and the like.
David's post was about "Russ Berrie" figures
32 likes/ hearts in 5 hours
ENGAGEMENT PERCENTAGE 4.38% rapidly for the tiny size of the group


VARIOUS CHRISTIAN GROUPS, MEMBERSHIP 20,000 - TO - 1 MILLION
David posted many posts heralding the new Christian movie studio and its first production to bring younger audiences back to God, special effects-heavy and in 3D, enthusiastically covered by talk radio shows all over the country. These Christian groups are extremely passionate and conversational.
ENGAGEMENT PERCENTAGE: ZERO.


Zero is Impossible without vast and coordinated (criminal conspiratorial)  censorship with obvious malicious intent. When David made continual public complaints, two posts received a single like from obvious dummy accounts with almost no friends, zero avatars and no posts of their own; plainly a "wise guy" malicious attempt to discredit the complaint, another act for which the lawyers must be held to account by the Courts regarding their ability to continue to practice law.


***EDIT*** YOU CAN FILE YOUR OWN COMPLAINT AGAINST FACEBOOK AND TWITTER LAWYERS TO THE CALIFORNIA STATE BAR!

CALIFORNIA STATE BAR FORM AGAINST LAWYERS:
PLEASE READ OR COPY THE MATERIAL ABOVE IN THE APPROPRIATE AREAS WHEN FILLING OUT THE FORM

FORM 1 (more to come for additional authorities) After reading the page, scroll down to "NEXT" to fill out the actual complaint:

Names of Facebook and Twitter lawyers who are arguably in violation of Sarbanes Oxley for not demanding changes in FB and Twitter operations regarding anti-trust violations, harassment and censorship with malicious intent.(more Facebook names expected soon. IF YOU TAKE THE INITIATE ON YOUR OWN TO FILL OUT A FORM, PLEASE FILL OUT ONE FORM PER LAWYER (the studio, David Rosler and other associated with the studio take no responsibility for the content of the complaints or the fact that any give or multiple complaints were filed):