This is serious.It's DANGEROUS. If you check the threat identified by AVAST, IT IS DESCRIBED LIKE THIS: 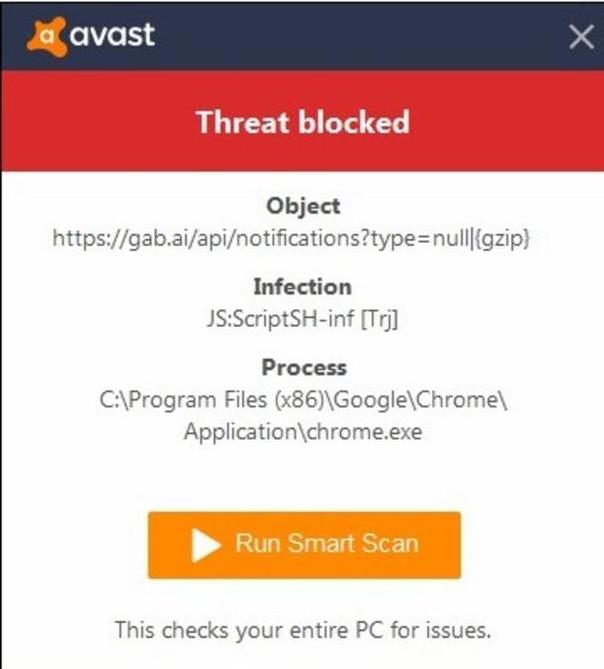 The Producers heard about GAB, signed up and no sooner did they start discussing Bravery and the social/political landscape in general did all the patterns they experienced at Twitter and documented by World Net Daily start up all over again: hardly any responses to Bravery or conservative-leaning posts  - that when in the very beginning people were strongly engaging - just like Twitter before the censorship set in. The few people who did respond became, within one week, almost entirely comprised of poisonously destructive trolls who used every angle they could apparently think of to discredit Bravery, the Bravery Producers, and eventually, anyone who said anything nice about either, in an attempt to bully Bravery Movie and friends of Bravery Movie into silence.

The Producers reached out to the GAB support and it's CEO, and that's when the real trouble started. The CEO, Andrew Torba, and an account that states to be the Torba's' "Mother", "Amy",  responded to the Producer's concerns about shadowbanning in the same hyper-aggressive bullying style of the trolls about which the Producer's have learned so much in their experiences with Twitter.

​After several attempts to get a straight or even concerned response from GAB, Bravery  Movie wrote this:

"Through effective use of Twitter, Proe and his brave co-leader, Kathy Amidon, played a major role in getting 192 congressmen to co-sponsor House Resolution 36, the bill establishing a select committee to investigate and report on the Benghazi attack.

Their success invited a series of relentless, coordinated false-flag attacks from the trolls. By pretending to be conservatives, they attempt to discredit the TPFA and confuse its followers."
http://www.wnd.com/2014/05/how-twitter-empowers-liberal-trolls/

"JS:ScriptSH-inf [Trj] is detected as a dangerous Trojan horse that comes bundled with malicious Java Script files. It is designed to damage your computer for malicious purposes. This Trojan horse can be easily downloaded onto your computer if you tend to visit the infected websites or click on the malicious links. Once it gets installed on your computer, it can destroy your system by doing much harm inside. It can make your browser almost unusable by changing its settings and redirecting the search results to some particular websites which are created by the rogue hackers. It can also automatically download other threats like viruses and spywares onto your computer. As a result, your system will become more vulnerable and cannot resist further attacks. This Trojan horse has another irritating function that it can gather and send your confidential information like online banking account details to the remote hackers. Therefore, if your computer is confirmed to be invaded by this vicious Trojan horse, it is strongly suggested that you take immediate actions to get rid of it from your computer."

The very few defenders of GAB on this matter have suggested that the virus warning was a false positive. Unfortunately, NO. That was Bravery Movie's first thought....no, actually, Bravery Movie's first thought, honestly, was that GAB CEO Andrew Torba followed through with his hate-filled rant and attacked Bravery Movie with one of the most destructive internet viruses known to man, but we did consider that it might be a False Positive, so Bravery Movie cleared the cache, deleted the cookies and changed to another I.P. well outside the United States. When Bravery Movie logged in again and went to notifications, cleared of just about anything else that could have attracted a false positive, Avast warned of the same Trojan a second time! Obviously, this was no "false positive". Obviously, the Bravery Movie account was attacked intentionally and maliciously in Bravery Movie's extremely-firmly-held-opinion by the people who run GAB - the same people who had already aggressively attacked and defamed Bravery Movie for having concerns about shadowbanning - as a warning to shut up and go away with, presumably, one smoking hulk of a ruined computer as the proof of GAB's hate-filled - and quite frankly criminal, in our opinion -  "warning":  a Trojan virus called "JS:ScriptSH-inf [Trj]"

Here are the warning notifications, each just a few minutes apart which show the warning came up not once, but twice. :

As you might expect, we're not the only Christian conservatives who have had problems with supposed "Christian-conservative-friendly" GAB. Here is well-known conservative broadcaster Alex Jones calling GAB "a joke" because of GAB's "manipulative control". We wonder if he also got a virus warning, only in his case, simply didn't know it if the virus

"Thank you for alerting us to your concerns. Please know that to the best of our knowledge no censorship of any sort takes place at GAB. We pride ourselves in enabling your free speech. However, our tech team will look into it. We are sorry for any inconvenience. GAB takes censorship very seriously. Thank you for being part of the GAB family of free speech advocates!"

That's not what the producers got.  Along with a storm of hate posts from obvious trolls, using the same psychological tactics used by the Twitter trolls, Torba's supposed Mother said this...

Imagine admittedly liberal Jack Dorsey, CEO of Twitter, or Mark Zuckerberg, CEO of Facebook, or Rush Limbaugh or Sean Hannity or anyone else responding like that! Not "We are sorry you feel this way and rest assured that the GAB tech team will make every effort to investigate this problem, but please know that GAB is committed to the highest ideals of free speech." Rather, we get "Your movie is Garbage" instead of either a professional customer service response or what we get from Christian radio station hosts who have been around for decades, "Your project, Bravery;On Wings Like Eagles, is awesome!"

At this point, the Producers had already come to the opinion that GAB was in essence a fake out, a trick to lure Christians and conservatives into an online trap, pretending to be a "family operation" to mask over their more overt professional indiscretions - to be professional without being held to a professional standard - and determined to destroy Christian conservatives with the worst kind of censorship and relentless, punishing hate. The Bravery Producers started hinting accordingly on GAB loudly, in an effort, at least, to push back on GAB's apparent censorship and obvious bullying so as to at least allow Bravery Movie a chance to be heard like everyone else. The Producers figured if they did not roll over, GAB would back off of the censorship and enabling of bullying which were in violation of GAB's own user terms. That's when things turned serious.

On Feb. 20, 2017, Bravery Movie logged into the Bravery Movie GAB account, and when the GAB notification page tab was clicked (so you can see responses to your posts, any new followers, etc), AVAST VIRUS WARNING CAME UP WITH THIS:

"Your project, Bravery; On Wings Like Eagles, is awesome!  Let me challenge all who listen to WNAH to make a donation today... to fight Hollywood's anti-Christian messages."  - Tony Cappuccilli, WNAH Radio, Nashville, serving Christians since 1949

Bravery tells the story of a future world in which Christians are persecuted for their faith. Part of this persecution in Bravery comes from a state-run monitor social media network which identifies and then actively destroys Christians. Part of the the inspiration for this aspect of the Bravery story comes from the producer's real-life experiences on Twitter, which in the opinion of the Producers, is very much akin to the kind of operation carried out in (barely) fictional New World City in the Bravery story.

Now there is a new chapter to the real-life experiences of the Producers, and it comes in the form of a social media site called "GAB", which advertises itself as an alternative to Twitter using the same style of microblogging communication invented by Twitter. Basically, GAB's pitch is that it is a place where conservatives can go to escape the censorship and unfair treatment which is becoming an infamous quality of daring to engage Christian or conservative views on Twitter. But is GAB legit, or is it an insidiously devised scheme to trick conservatives and Christians into deleting their own Twitter accounts voluntarily - so as to ease the pressure coming down on Twitter for censoring and enabling the trolling of conservatives on their platform - and baiting Christians and conservatives into joining GAB instead, where their voices are minimized into a relatively small community of like-minded people, where GAB then censors and enables the trolling of those same accounts in a tiny bubble, away from Twitter?

It is the opinion of the Bravery Producers that the latter is absolutely, positively 100% the case. Let's review the facts.

The Producers have been so badly attacked on Twitter that one of the trolls, a certain Kristian Snow White from Fresno, California,  earned a criminal summons for harassment, filed by co-Producer Kathy Amidon, in which the police plainly state that there is "probable cause" that a crime was committed by the individual in question, Kristen Snow White (MORE SUCH SUMMONS AND WARRANTS ARE BEING PREPARED). There are leftist trolls who truly do not like the Producer's world view and activism, and, frankly, that's just too bad for them. Christians who fight for God do not allow themselves to be bullied into silence. Period.

If you are not already aware of the fact, you need to know that the co-producers are proven legit individuals who have withstood the eye of scrutiny. These two World Net Daily articles about their battles with Twitter well-document the situation and side with the two group leaders; highly experienced media/entertainment professionals who would, in time, become the Bravery co-Producers.

It is absolutely the opinion of the Producers of Bravery; On Wings Like Eagles, whose political activism has been covered by mainstream media and publicly praised by many US conservative congressmen, that the new social media microblogging platform GAB is an extremely dangerous trick designed to lure conservatives into a trap and, apparently, will go so far as to try to destroy users' computers with extremely dangerous computer viruses, and this last part about the viruses being gotten on GAB is not mere opinion, that's a manifest fact. We're going to send this to every appropriate big name we know.

IT IS THE OPINION OF THE PRODUCERS THAT ALL CHRISTIANS AND CONSERVATIVES SHOULD STAY VERY FAR CLEAR OF GAB. SINCE TWITTER AND GAB ARE, IN THE OPINION OF THE PRODUCERS AND MANY OTHERS, HOPELESSLY CORRUPT, THE BRAVERY PRODUCERS WILL BE LOOKING FOR ALTERNATIVE CHAT SITES FOR CHRISTIAN CONSERVATIVES. IF YOU HAVE ANY IN MIND, PLEASE RECOMMEND THEM ON OUR FACEBOOK PAGE. Links that lead to virus sites will be prosecuted to the fullest extent of the law, so keep your chat room suggestions clean, please, and the Bravery team will stay on it.

Thank you for reading and may you have a blessed, hate-free day. God loves you and He is watching and helps those who watch over their families.